Reactive maintenance in a world of rapid change

Has reactive maintenance had its day? When the parts you need are suddenly unavailable, a planned maintenance approach starts to look much more attractive. Maybe it’s time to think again about priorities that drive maintenance engineers?

Who’s most useful in a maintenance crisis – the hero who rushes in to fix the problem or the person who sets up a process that means the breakdown won’t happen again?

Reactive maintenance is, for many organisations, the way it’s always been done. Sure, you may replace components on the original equipment manufacturer’s service schedule but, apart from that, most of what your maintenance team does is respond to breakdowns.

It’s not a great way of doing things but, provided that parts are plentiful, you can get your assets up and running again. But what about today’s world of disrupted supply chains and rising prices?

The 2022 Indirect Procurement Report, produced jointly by RS and the Chartered Institute of Procurement and Supply, found that supply chain disruption was a key challenge for 76% of UK Maintenance, Repair and Operations teams, second only to inflation and higher costs.

These pressures are forcing the question of what maintenance teams are for and highlighting the shortcomings of adopting a reactive approach, says Gary Harvey, Head of UK Field Services at RS.

“What are you going to do differently to move, from out of control, to possibly less out of control? Have you got a plan? Because you’re not going to get there just by trying harder each day,” he adds.

“Just doing what you do better, isn’t going to move you from one stage to the next. You need to do something differently. And that can be very hard when your time is occupied being reactive.”Gary Harvey, Head of UK Field Services, RS

“Just doing what you do better, isn’t going to move you from one stage to the next. You need to do something differently. And that can be very hard when your time is occupied by being reactive and, by definition, you then haven’t got the time and resources to do something that’s a bit more planned.”

“If we’re always in reactive mode, it’s the age-old problem of putting sticking plasters on some fundamental problems without taking time to make it more efficient in the long term.”Dr Moray Kidd, Maintenance Engineering Academic

“A lot of good maintenance practices require upfront investment, albeit a small amount, to release these limited resources to work on value-adding activity,” he says. “If we’re always in reactive mode, it’s the age-old problem of putting sticking plasters on some fundamental problems without taking time to make it more efficient in the long term.

“I know it’s easier said than done,” Dr Kidd concedes. “If you’re making a million tins of food per day, and production is king, it’s a real challenge.” But moving to a reliability-centred approach will bring benefits in terms of reduced disruption and cost, he says.

A planned maintenance approach is something Naim Kapadia from the UK Manufacturing Technology Centre strongly advocates. “Working closely with industry, I’ve seen what happens when there’s an unexpected breakdown. Engineers are working feverishly to get the machine up and running,” he says.

“Some major downtimes are caused by not having the parts to hand and therefore having to wait hours or maybe days before receiving the item. So sometimes a review of preventive maintenance may be required.”

Using condition monitoring to detect faults before they develop into a major defect will avoid the risk of unexpected breakdowns altogether, he adds. Predictive maintenance avoids failures but also allows you to schedule maintenance at times that avoid disruption.

Culture change from top to bottom
Such a move will require a change of attitudes on the part of some maintenance engineers, says Richard Jeffers, Managing Director of RS Industria. “It’s about behavioural change,” he explains. “We need to value problem solving and getting to the root cause of yesterday’s problem, because that’s going to stop the firefighting tomorrow.

“We need to value problem solving and getting to the root cause of yesterday’s problem, because that’s going to stop the firefighting tomorrow.”Richard Jeffers, Managing Director, RS Industria, RS Group

“If, culturally, your maintenance organisation is 100% shift based, designed to react to failure, then basically you’ll have very poor compliance to your work plan. So you’ve got to differentiate your maintenance execution into planned and reactive work. And you’ve got to emphasise the importance of doing that plan.

“It’s about breaking out of that reactive cycle. If it’s a component failure, let’s understand why it failed. Is it because it’s a weak component or is it operator error? It might be because it’s too weak or because we’ve overstressed it. If we find the answer, that will tell us the action we need to take to stop it happening next time.”

But Dr Moray Kidd says a reactive approach may still have a role in certain circumstances. “Often people think that reactive maintenance is no longer appropriate. But for items that are less critical, run to failure may well still be an option,” he says.

Reward the right maintenance approach
Everyone loves a hero but, as rapid change overtakes maintenance engineering, the real heroes are not the ones who live to react to breakdowns but the people who embrace predictive maintenance that prevents breakdowns in the first place.

RS’s Richard Jeffers agrees that change takes time but the approach needs to change from the top of the organisation. “Many businesses are still rewarding the hero culture, rather than an analytical approach,” he says.

“We’ve got to get people to value the engineer that lives in a calm environment because he’s in control, more than the hero that runs in and fixes that machine at two o’clock in the morning.”

Maintenance teams should focus on achieving high levels of availability and performance coupled with efficiency, he says. “If you’re always running at 100 miles an hour with the fixer-hero culture of firefighting, you’re never going to catch up.”

Richard has a wealth of experience in the Manufacturing, Services and Infrastructure industries. A Fellow of the Institute of Mechanical Engineers, Richard is now Managing Director for RS Industria at RS Group.

Dr Kidd has a wealth of experience working in various professional mechanical engineering roles for companies including ABB, GE and BAE Systems. He has been awarded Fellow of the Institution of Mechanical Engineers in recognition of his significant responsibility and contribution. Dr Kidd is a Fellow of the Higher Education Academy and a NED for an International Engineering Training Charity. Between 2007-2017 he held the role of Deputy Director for BP’s Global Engineering Management Programme. In his current role at a leading UK Russell Group University and the University of Sydney, Dr Kidd delivers a range of Reliability Engineering Courses. He is also actively involved in the development of international standards for Asset Management and Dependability. 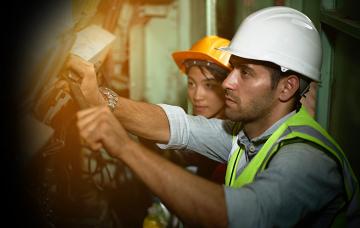 Machine downtime can be costly. We work with you to maximise plant resilience and improve asset performance.

Why engineers must get to grips with finance