Where are you on the Resilience Index?

We've delved into 20 years' worth of data to show senior engineers, how, where and why resilience in UK manufacturing is the number one objective for them.

Over the coming months, we'll be unpacking the issue in UK manufacturing across three key areas to help engineers focus on increasing resilience in the months and years to come.

We’ve built the UK’s first comprehensive look at resilience in the manufacturing and industrial sectors, to show senior engineers how making changes to key resilience drivers of plant, process and people can make a big impact.

Using a diverse set of data from the likes of The Organisation for Economic Co-operation and Development (OECD), Office for National Statistics (ONS) and Health and Safety Executive (HSE) we have created the RS Components Resilience Index, which shows how different parts of the economy have demonstrated resilience over a 20-year period.

The findings make essential reading for senior engineers and anyone responsible for the increased production, better ways of working and financial performance of a manufacturing business.

We’ll be releasing special reports into Plant, Process and People from our research shortly. However, to launch the Resilience Index we’re announcing some of the key findings.

While many areas of UK manufacturing are showing vital signs in key measures of business resilience, others are more fragile. Food production and manufacturing, metals and the textiles sectors are not only below the manufacturing average but below the UK average too. While they were making small gains in the early 2000s, after the financial crash of 2008, these reversed and have never recovered.

The chemical industry is among the most resilient of the manufacturing categories. After suffering a dip, post-financial crisis levels have continued to improve at a speed greater than the manufacturing average - and in line with their consistently higher than average rates of investment.

The oil and gas manufacturing industry also shows high levels of resilience, although it fluctuates wildly depending on the volatile price of oil. However, even when oil prices have been at their lowest resilience, it has still been 50 per cent higher than the rest of the manufacturing sector.

Another solidly resilient category is the engineering and vehicle industry. At the financial crash, its level of resilience faltered much less than the rest of the sector and UK economy and not long after, rose again, supported by continued investment.

From March onwards, we'll be delving into three key areas of resilience; plant, process and people, exploring these levers of resilience in greater detail and hearing from key experts from manufacturing, to see how the story of resilience is playing out, on the factory floor and boardrooms in the UK.

You’ll be able to hear the views and insight from experts throughout RS Components, who are working side by side with customers and suppliers to help build resilience.

The importance of playing it cool in control systems 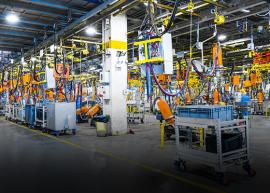